Read this article at

Roundtable Conversation with ScholarLed – Part 2 of 2.
To read part 1 of this interview please click here

ScholarLed is a consortium of five scholar-led, not-for-profit, open access book publishers that was formed in 2018, consisting of Mattering Press, meson press, Open Book Publishers, Open Humanities Press, and punctum books. OAPEN recently added ScholarLed as a new collection of the OAPEN Library. Together, these 5 presses have already published 517 OA books, which makes it our second largest multi-publisher collection (Knowledge Unlatched being the largest). We invited the members of ScholarLed to join us for an online discussion about their collaboration.

Eelco: What are you after as a collective?

Gary (Open Humanities Press): For me this question raises a larger issue. What would success be for us? What would it look like?

The fields in which many of us work (critical theory, digital culture, networked media, STS etc.) have their roots in the humanities and social sciences (HSS). And while it’s certainly true we operate in different countries, one thing many of us have in common is that our respective political systems do not especially value work in HSS, much preferring STEM (science, technology, engineering and mathematics) research, seeing it as being more in line with society’s requirements.

Let’s take as one of the many possible UK examples we can use to illustrate this, the infamous ‘Weirdos and Misfits’ blog/recruitment ad of Boris Johnson’s chief adviser and humanities graduate, Dominic Cummings. Here we find an explicit rejection of ‘English graduates who chat about Lacan at dinner parties’ – a phrase we can read as being shorthand for those who are interested in abstract ideas to do with language, interpretation and critique. Instead, Cummings prioritizes supposedly more concrete subjects such as the kind of computer modeling and super-forecasting that is made possible by big data and artificial intelligence. Or, if a further example is needed, there’s this from Philip Augar (of the Theresa-May-commissioned Augar report fame). It’s taken from a piece published in the May-June 2020 issue of the Times Higher Education titled ‘It is Time to Face Up to the Reality of the Market’:

The Exchequer loses money on a third of all subjects studied by women and a quarter by men. The state writes off more on social studies subjects than on maths, computer science or engineering; more on communications and media studies than on agriculture and veterinary science; and more on creative arts than on any other subject…. Without challenging the intrinsic worth of any subject… there is a misalignment between the state subsidy and the economy’s needs.

Given this kind of political context – which is by no means untypical – we could say that one measure of success for us in ScholarLed is to be (still) doing what we’re doing. (At a time when Covid-19 is having a disproportionate impact on BAME communities, with black people four times more likely to die in England and Wales than white people according to the Office of National Statistics, and when there are protests across the world over the death in US police custody of George Floyd, and what all THAT says about reality and the economy’s needs, God forbid more people should have access to critical humanities and social science subjects.) But I’m aware that at Open Humanities Press we’ve long thought success would also be to get to a stage where, actually, we don’t need to do what we’re doing anymore. It would be to arrive at a point where enough other people are publishing open access books and journals of critical theory on a non-profit, scholar-led basis for us to be able to turn our attention elsewhere. That’s what we’re after as a collective: our own redundancy or obsolescence. (Just so long as it comes after that of Cummings and Augar.)

Vincent (Punctum Books): I think we are very much still discovering what we are after, but I think some contours are already becoming clear. We have no intention to grow or merge in any usual sense of the word. We are interested in finding ways in which we can share resources, knowledges, and infrastructures in such a way that everyone can keep doing their thing at their own pace.

Lucy (Open Book Publishers): Yes – the idea behind the collective isn’t to homogenise; it’s to preserve our different ways of working but finding ways to support each other in what we do. I think we also share the goal of making academic-led, non-profit publishers a more powerful voice within the academic and para-academic communities. It’s very frustrating to see many researchers look at the legacy presses and assume that is the only way to publish OA books, when we do it differently (and, we think, better!)

Julien (Mattering Press): Again, I think Janneke’s notion of scaling small encapsulates our aim beautifully. There is this idea in publishing and publicly-funded infrastructure projects that scale is crucial. Emphasising scale justifies homogenisation and in many cases, monopolisation. The latter is especially evident in attempts to establish one-stop platforms. Drawing on an ecological metaphor, we advocate for the diverse publishing landscapes that we believe are necessary to develop desirable knowledge infrastructures in response to radically uncertain futures. From a technological perspective, this requires a shift from platforms, that homogenise, to open infrastructures that enable small initiatives to operate effectively. 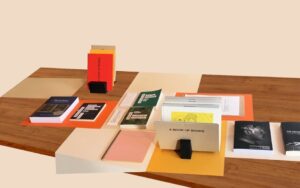 Vincent: Because we operate from different countries, the legal structures of the different presses are different. However, we all are public benefit corporations in a broad sense of the word: for each of us, making profit is subordinated to providing a public good.

Lucy: I think I’m right in saying that we all have a mixed funding model – for example, OBP’s primary sources of revenue are sales (of print and ebook editions), grants and donations, and our Library Membership programme.

Andreas (meson press): During our time at the Hybrid Publishing Lab, we researched various business models for the monograph publishing area. And although we gained some significant insights from this, at some point it was more important for us to get started and remain flexible. In a way, the decision to establish meson press as a cooperative was more important than a perfectly elaborated business model. With its principles such as democratic membership control, autonomy, independence, and the concern for community, the co-op perfectly fits our approach of building a network of scholars around the press(es).

Julien: Of course, we all strive to sustain ourselves. Still, there is also space for the question if business models are necessarily the right, never mind the only way to model infrastructure futures that primarily provide public goods. All academic publishers, after all, exploit the labour provided by public institutions such as libraries and universities. And the seemingly common-sense idea that we can model business at all is a relatively new notion that implies politics we might well choose to interrogate.

Eelco: What is the relationship with COPIM and OPERAS?

Lucy: So we are key partners in the COPIM project, with several of us leading different work packages. We will also be adopting the infrastructures COPIM will build, and so we’ll act as test cases or guinea pigs for COPIM builds. As part of COPIM, there is a formal link between us and OPERAS-P, since Agata Morka is the liaison between the two projects. And we’re open to working with organisations like OPERAS, Invest in Open Infrastructure, etc – any organisation that shares our goals and broad ethos, really – if opportunities present themselves.

Eelco: Will you expand? Are you open for new members?

Vincent: Actually, the idea to incorporate was partially spurred on by several requests from other presses to become ScholarLed members. This made us think about how we can define ourselves and how we can facilitate our expansion without sacrificing our idea of “scaling small.”

Lucy: Yes exactly as Vincent says, those conversations are ongoing amongst ourselves at the moment. We’re working out what the next phase of ScholarLed will look like, while still maintaining our publishing activities and our work on COPIM – and amid the convulsions the world is currently experiencing, which are affecting us all in different ways.

Eelco: Will you provide services to other presses?

Vincent: We will for now concentrate on providing services to member presses. There is always a risk, when providing services to third parties, that the profit motive and concerns for “customers” take over the core mission of the organization. We want to be very cautious about replicating economical models that may prove detrimental to our goals in the long term.

Rupert (Open Book Publishers): Having said that, we are committed to being open and transparent in our operations, and ensuring that the software we create is open source and is available for others to download and utilise (e.g. https://github.com/scholarled). So we hope that other publishers and presses will be able to directly benefit from our activities, even if they are not formal members of ScholarLed.

Eelco: I presume you didn’t expect ScholarLed to take off as it has, or did you?

Vincent: To be honest, it does not come as a surprise. We are 5 presses, all led by scholars with an active career in the humanities, social sciences, or the arts. We all chose publishing as one of our main creative and intellectual outlets. So when the synergy is right, of course it takes off.

Julien: Uhhh, I still gain hope from the experience that working this way can generate such momentum. The collaboration is dynamic, productive and inventive, more so indeed, than most of the many commercial or institutionalised projects I have worked on.

Eelco: So where are you heading?

Vincent: We have no intention to become “the model” for scholarly publishing. It is our modest goal to provide a viable, long-term alternative to the predatory publishing models that currently dominate the market. We have no illusions that these will always exist, but scholars should at least have a fair choice.